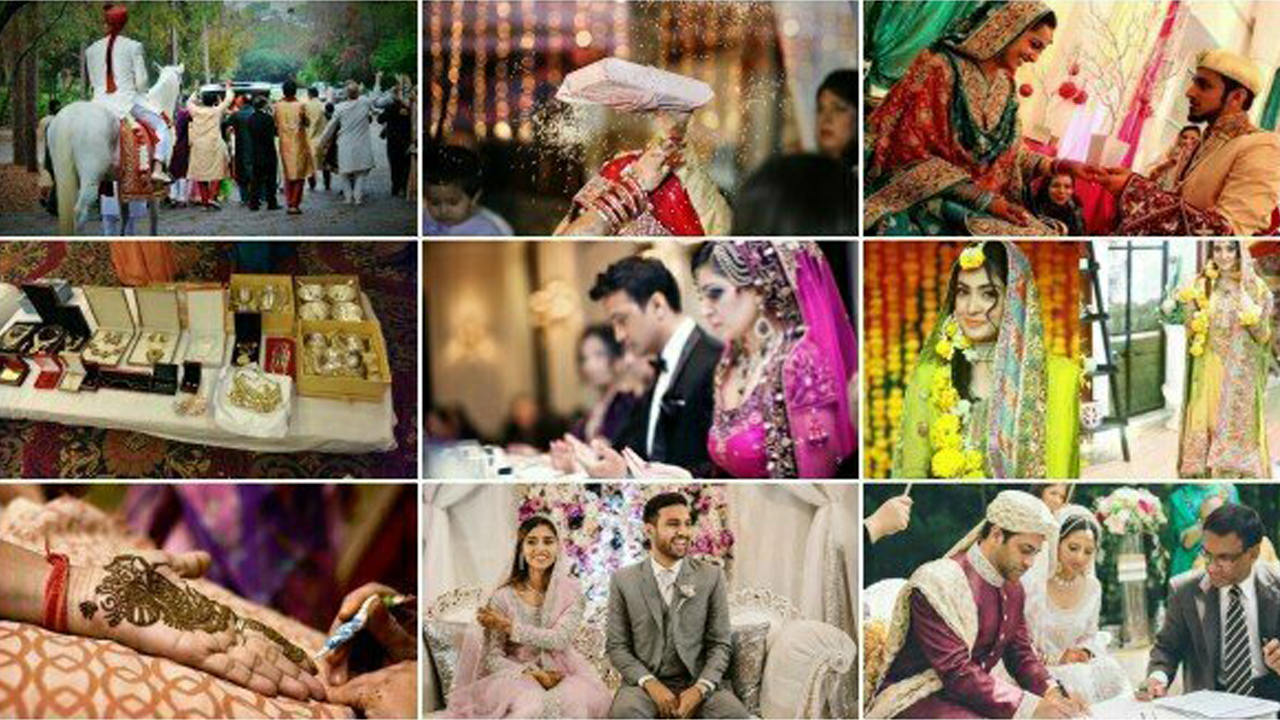 a philosophy, theory, or way of behaving which practice by individuals or we can say all such principles which a specific community have been pursuing for a longer time.

Muslims look first to the Quran, comprising ALLAH ALMIGHTY’s commands and second to the example of Prophet Muhammad ﷺ (Peace Be Upon Him) as an embodiment of Islamic ideals, to give the religion a living pattern. The Islamic faith maintained and recorded beliefs as accounts (hadith) of the Prophet’s statements and acts. The Islamic way of existence was developed and thoroughly articulated in the Shariah-Islamic rule centered on these two sources. Shariah merely means “the path” or the route to be practiced by all Muslims. Muslim law represents the reality that Islam is a complete way of life where culture, politics, and community are connected necessarily.

Wedding is an essential part of Islamic tradition and is the main responsibility of a Muslim, as mentioned in the Holy Quran. It helps a Muslim through his family and future generations to maintain and expand Islam. The traditions of Muslim Marriage differ significantly from country to country, but the ritual of ‘Nikah’ stays the same at the core. The Islamic wedding ritual is recognized as Al-Nikah and is held all over the world.

Islam acknowledges the importance of sex and gender as the foundation for communities and encourages conformity with a fundamental need. ‘According to Hazrat Muhammad ﷺ(Peace Be upon Him) statement, marriage is highly regarded and considered as half of Muslim’s Faith.

Marriage traditions in the Islamic world differ from each other in different countries.

They also hold the compulsory Islamic activities that affirm marriage and other traditions that differ in their respective communities. Here is a small portion of the traditions that are followed by the Islamic community in Pakistan.

Rishta in Pakistan or we can say the binding between man and women are done by their elders in the family in common words in Pakistan there are vastly spread traditions of Arrange Marriages. Still, both the groom and bride have the right to accept their partner for Nikah.

It is the event where relatives place Mehndi (natural red dye, often called Henna). In some Families, this event completed in one day and some families it lasts for two days, one day at the groom’s place to place Henna from the woman’s side, and the second day at the house of the bride to bring Henna upon her hands – with folk and traditional songs and some occasional dances by cousins, brothers, and sisters.

Event Of Barrat or Nikkah Day:

There are several weddings in a mosque today. If it is not in the mosque, the groom is taken to a mosque where he prays to praise and thank Almighty Allah.

The Shadi, which is usually arranged by the bride’s side, where the real Islamic contract of marriage occurs called Nikah. Groom side appears in the Barrat procession with its rituals, a trumpet in the front, and showering of coins and currency notes by the groom’s side for those who follow it.

After the Qazi Came with at least two witnesses from both sides, the nikkah has been officiated by the Qazi following both sides’ agreement. Qazi, an only counselor, now as an Imam of a mosque nearby. Upon the signature on the marriage document, the Qazi must deliver an Arabic marriage lecture after this bride and groom are named as Husband and wife. When prayers have concluded, all guests rise and embrace the bride and the groom, their parents, and their extended families. In this embrace, snacks are spread that involve dried dates, almonds, and cookies.

Yet also tasty meals are offered to all visitors of many relationships. Shadi’s end with Rukhsati. When Rukhsati is happening a copy of the Quran is held over the bride’s head, while the groom wait for her, She says farewell to their families with the last support from her father and a lot of emotion.

Sisters, cousins, or sisters-in-law prepare the meal and bring it to the groom’s house and do breakfast with the bride and groom so the bride can easily adjust in husband’s home and feel comfortable by the company of their family members there it’s a tradition to send first breakfast of daughter on the very next day of Barrat.

The term walima derives from alwalam that is to be compiled or brought together. It’s a feast in Arabic. Walima has been arranged in the post-marriage household as a symbol for marital happiness. Walima is commonly used for the celebration of a marriage ceremony. Following the wedding, Walima is the dinner reception after the day of Barrat. The wedding family shares this feast with their relatives, and it is organized by the groom’s side.

It’s a tradition which widely followed in Pakistan called as muklawa when the bride’s family come on walima, and after the feast happens, they take the bride and groom with them to the bride’s house where they spent a night and on the other day the groom’s family comes and take bride and groom along with them, gifts are presented to the persons who came from groom side, and after this, all the traditions of Islamic wedding end’s in Pakistan.

In such a beautiful way and manner, all the events happen at a wedding in Pakistan. It also becomes a reason to know the families of each other entirely and meet relatives of each other so the love and happiness can spread along the way of wedding. Most important two different souls who are meant to be together are finally buckled up with each other for the whole life and start their family and being on the side by the side of each other and are companions of each other in up and downs of life in happiness and grief, pain and joy.

I hope this article can help you to take a brief look at the Islamic Marriage tradition in Pakistan, or we can say the Rishta in Pakistan.